Despite being the game-changing tech that it is, recent research shows less than .01% of the world owns cryptocurrency. This number is way lower in countries with mostly bankless populations. Pundi explains, There are 2 reasons crypto has yet to enter the mainstream:

Pundi X is a Proof of Sale (POS) device that connects to the blockchain using Xplugins. Starting in Indonesia, these devices will be distributed to retail stores, convenient stores, and cafes. The device allows people to use their Pundi card to buy or sell cryptocurrency, as well as the goods/services that store offers. Buy anything in the store, then buy or sell bitcoin/other cryptos almost instantly!

Here’s a demo of how the device works.

If all works to plan, PundiX will incentivize store owners by giving them a free POS device and allowing them to keep most of the fees. Customers will journey into a store that has PundiX. They will pay for crypto, and in return, get a fancy card with no private keys to worry about.  The card is then used at any location that uses Pundi. Any purchase of goods/services with your Pundi card allows rebates.

PXS  is a utility token within the Pundi ecosystem. Its used by developers and sellers to pay gas fees in order to sell their crypto and other goods, in convenience stores, cafes, and shops. Any company or customer that wants to access the ecosystem will have to pay a transaction fee in PXS. These PXS fees are then burned by the smart contract, lowering the total supply.

PXS is a proof of stake (POS) token for the first 3 years of its existence. Each month holders will be awarded PXS airdrops.

The presale is already over. The token price was 650PXS/eth. They raised around $4 million.

Pundi X is trying to raise over $80 million during the ICO. That is A LOT of money. The reason it’s so much is they are using the money to build the POS devices which they are giving out for free to retail stores, as an incentive, in and around Indonesia. Depending on the amount they raise 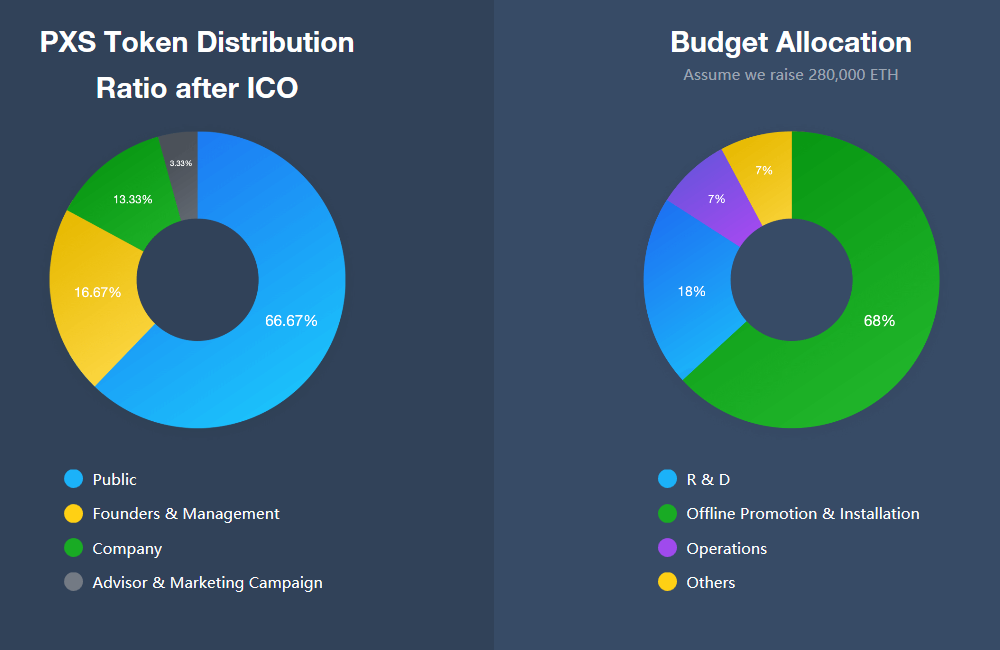 Important to note: “If this ICO does not generate 35,000,000 PXS tokens in sales, the company reserves the right to use the remaining tokens for a second ICO. The token price for any second ICO would be greater than in this round, and the current token holders would also be rewarded. The management reserves the right to terminate this ICO and, if this decision is taken, all ETH invested will be returned to the original investors. ”

The Pundi X team is already 30 people deep, 15 of them (operations) are in Jakarta, Indonesia and the other 15 (R&D) located in Shen Zhen, China. They also already have a very large list of backers/advisors.

It looks like a very talented team, a few members that stood out during my research are:

PundiX has a massive community. Their social media is extremely active.

There are plenty of projects already in the space, somewhat, as they are crypto debit cards. However, most of these projects are running into serious legal problems, as Visa/Mastercard are shying away from letting them run debit cards on their system. Pundix need not worry about this. They have a technology/system in place that will never block users out. One that allows you to buy or sell crypto right there at the store without complications.

In January, the team launched Pundi Pundi (their mother app) already one of the most popular QR payment apps in Indonesia with over 100k downloads, and 20k active users. This app allows people to pay their utility and other bills with little effort, and now with crypto.

Word on the street is Pundi X is the “Indonesian Omisego”. This is a bold statement that could turn out to be a tremendous marketing campaign.

There’s so much to like about PundiX. It’s a great idea, huge community, solid team, working product(demo), and incentives. What stinks is if you do not live in Indonesia, you cannot use it, and don’t get a fancy card. What you do get for participating in the ICO is proof of stake for the first 3 years, and the hopes of your token value rising as the platform gets more and more popular.  6 out of 10

Disclaimer: The writer owns bitcoin, Ethereum and other cryptocurrencies. He holds investment positions in the coins, but does not engage in short-term or day-trading.