Cyber Warfare in the Ukraine Conflict 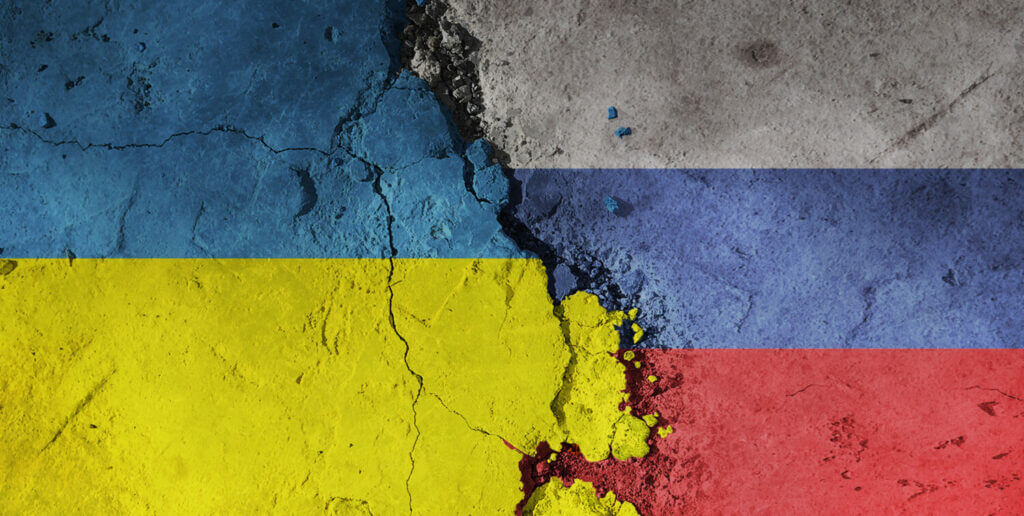 The rising tension between Russia and Ukraine has led to the start of a European war. One of the most prominent outcomes of the ongoing situation has been a considerable increase in cyber attacks against the West and Ukraine. In this article, we’ll be looking at the state of cyber warfare in the Ukraine conflict and what sort of attacks we’re likely to see in the near future.

The Ongoing Tensions in Ukraine

It is a relatively well-known fact that Russia and China are the two most-common origin points for cyber attacks. In particular, Russian hackers have performed various high-profile attacks against Western government bodies and infrastructure. Even with Google and Microsoft starting a global crackdown, it seems like Russia is much more prepared for waging cyber warfare than other countries are. Researchers have tracked nearly three-quarters of all ransomware revenue back to Russia.

With the ongoing situation developing in Ukraine, Russia has begun committing highly targeted cyber attacks. The Ukrainian deputy prime minister claimed Russia recently attacked two different banks and the Ukrainian defense ministry. Now, with Russia launching a full-scale invasion into Ukrain, these attacks are starting to ramp up in severity and frequency.

Why Russian Cyber Attacks Are Dangerous

We’ve already talked about the dangers of cyberattacks, but these events are more dangerous than common cybercrime. It’s well-established at this point that Russia will use cyber warfare in its wartime strategy. On the international stage, cyber warfare is in a legal grey area. However, with the increase in openly hostile cyber-attacks, Russia could easily cross the line into a full-blown war without firing a shot.

The biggest problem with this situation is Western countries are mostly unprepared for cyber warfare. While China and Russia have been building cyber security and aggressive hacker teams, the US and Europe are seemingly behind. As a result, if Russia initiates a conflict through cyberattacks, it could cause unsuspected damage to countries far outside of the potential warzone.

The first noticeable sign of cyber warfare from Russia is the recent attacks in Ukraine. These DDOS attacks have taken down the Ukrainian Defence Ministry website and various online banking systems. Russia has claimed it didn’t perform such attacks, but experts have pointed out that foreign aggressors often choose DDOS attacks. Moreover, with the country’s history with cybercrime, this attack is likely related to the ongoing tensions.

The primary outcome of the DDOS attack was citizens losing access to banking services for several hours. In addition, the ministry of defense website was indeed taken down for several hours, but it’s not yet known if any internal services were affected at the same time.

Another smoking gun in Russia’s hand is the scale of the DDOS attack. The Deputy Prime Minister called this attack the biggest one in the country’s history. Without state-backing, it’s unlikely a hacker would have the resources to pull off something of this scale.

What Does The Future of Cyberwarfare in the Ukraine Conflict Hold?

So far, we already have warnings coming from the UK’s GCHQ that infrastructure is in danger. In addition, experts have claimed that Russia has enormous cyberattacks in the works as part of the country’s war strategy. As a result, more effort is being put into defending critical infrastructure from cyber-attacks.

Where Could Russian Cyber Attack Target?

It seems likely the US and UK will both be significant targets of Russia’s potential cyber-attacks. Firstly, the US has been a target of Russian hackers for years. As recently as 2021, Russian hackers damaged a vital piece of American infrastructure. Whether or not that particular attack was state-backed or not hardly matters. That attack proved Russia could cause significant damage to US infrastructure with a cyberattack, and the Kremlin has noticed.

During any form of conflict, the chances are that we would see significant attacks on infrastructure. Notably, Russia may target financial institutions and utilities such as power and water systems. Due to the advancement of technology, most of these systems depend on computer networks that could become vulnerable.

It should be evident that during any conflict with Ukraine, Russia will also use cyber warfare against Ukraine. However, these attacks may have more of a military focus to obfuscate the Ukrainian military and NATO allies.

Another likely component of Russia’s cyberwarfare strategy will be the use of cyber espionage. Hackers will likely seek information about strategy and deployment by breaching western computer networks and stealing vital data.

The most prominent targets for espionage operations will be government bodies. For example, a country’s defense department has a wealth of sensitive information that an aggressor could use to find an opening to attack. Even bodies containing information about a country’s population, such as a statistics or census office, could provide hackers with a wealth of vital information for an attack or invasion.

Obviously, in the case of cyber warfare in the Ukraine conflict, the biggest target for statistical information will be Ukraine itself. But, on the other hand, that doesn’t mean Russia won’t target citizen information in the US or UK.

What You Can Do About Cyberwarfare in the Ukraine Conflict

While it may seem like you have no power to defend yourself in this situation, there are some steps you can take to help. Having strong cybersecurity at home will still be helpful in the case of frequent, more minor attacks. The first thing you can do is follow our guides:

These guides will help you to protect your personal information from hacks in a variety of different situations.

Another big step you can take is to write to the local politician for your area. Try to impress upon them that the nation’s cyber security is a big concern for you. If you can convince others in your local area to do the same, then it’s more likely your local representative will make your concerns known to the government at large.

A final step you can take is to use our security services. We can help you recover lost accounts and offer monthly protection plans to keep you secure from the start. Contact us today for more information on our range of security services.