The crypto-verse has suffered a monumental skid that lasted a few painful hours and sent prices to critical points of validation.

At the time of writing, Bitcoin trades at $8,366, Ethereum at $168.1 and XRP at $0.238. These are all levels that I saw in previous long-term analyses as possible targets of the consolidation process.

The news is on how fast these objectives have been reached after several weeks with prices in the top range.

It is not bad news if they do not move further. The margin of fall to the point of no return is small – so that the scenario will be defined in the short term.

The accumulation Scenario: Once we reach these extreme levels, the price spends a considerable amount of time emotionally shaking the holders to release the coveted pieces.

Trend change scenario: The bullish movement born in December 2018 is over, and new lows are sought to complete a theoretical ultra- long term bearish pattern.

Some theories point to the sudden collapse of Bitcoin’s hashrate in recent days as a precursor to the falls of yesterday.

This technical explanation is as valid as another, but what is certain is that this type of sudden fall in the installed computing power, usually anticipates long term upward movements. This phenomenon can be observed in the attached images thanks to Bitinfocharts.com. 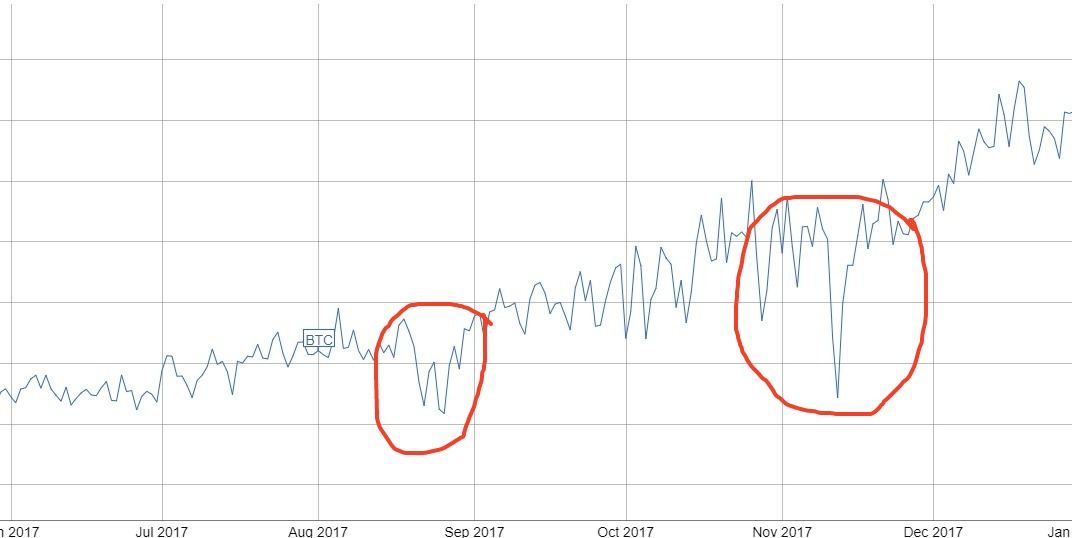 ETH/BTC  is trading at 0.0200 and remains above the 50-period exponential average. The technical situation is borderline. Below 0.0194, the scenario would worsen for the medium term.

The MACD on the daily chart is not crossed down despite losing all its bullish inclination. Also, the lines have come together a lot so that high volatility maybe a few more days between us.

The DMI on the daily chart shows a tie between the bulls and the bears. Both show high levels of strength, although being below the ADX line, there is no clear leadership.

The BTC/USD pair is currently trading at $8,366 although a trader has managed to buy 20 Bitcoins at an approximate price of $1,800. It has been thanks to a lack of market oversight by market makers in the Binance BTC/BUSD pair, which has allowed a large slippage due to the lack of density in the position book.

The MACD on the daily chart opens downward and configures for a continuation of the declines. Only the relative violence of the drop gives any small chance of a short term bullish turn.

The DMI on the chart shows the bulls moving in a few hours to bearish extremes, while the bears also shoot upward with high speed. Again, it is the current volatility that can facilitate an uptrend in the short term.

ETH/USD is currently trading at $168.1 after hitting a low of $155.5 on Tuesday. Ethereum has lost the support of moving averages and seems willing to provoke a bearish opening of the leading moving averages again. This scenario would lengthen the long-term bullish process for several weeks.

The DMI on the daily chart shows the bears spinning upwards and beating the ADX line. The bulls lose a lot of strength – but, strangely – they are above the levels seen at the beginning of the month with higher prices.

XRP/USD is currently trading at the $0.238 price level and is moving below the supports created by price congestion. A long term bearish trend line around 0.020 remains as support. If it loses this level, it would find support again in the $0.175 range, already at 2017 levels.

The MACD on the daily chart crosses down just at the zero levels of the indicator. The setup allows for a short term bullish surprise, but it is not uncommon for the situation to get complicated.

The DMI on the daily chart shows the bears moving higher but unable to move past the ADX line, a figure that subtracts much strength from the bearish momentum. The bulls lose power but remain at quite high levels. There are similarities with the divergence seen in Ethereum.