Moirai is a “decentralized” prediction market platform that allows operators to build their own markets, using smart contracts on the Ethereum platform.

A prediction market allows traders to take positions on future events.  A few good examples being an election, the price of ETH next month , or who will win the Arthur Ashe award in 2018 (hint. Caitlyn Jenner type) .

(from wikipedia): In 2012, Intrade, one of the 2 leaders in the prediction markets, had more than 50 million monthly page views during the election months.” Apparently they predicted the correct outcome of every state senate contest accept 2. They were starting to get tremendous amounts of attention from the media, when on November 26th, 2012 the Commodity Futures Trade Commission had seen enough, and filed a civil suit in federal court. That was the end of the USA being allowed on Intrade. This stinks, but now its 2017 and smart contracts are revitalizing the Prediction markets. According to Moirai, their platform will be “decentralized”. Meaning, once it is up and running on the eth network, there is no central server to be switched off.

According to their whitepaper, “The global prediction market is expected to reach $37.7 billion by 2023″As you can see, there is plenty of competition already. Moirai claims to be ready . I have a hard time arguing that, they do have a beta (that I enjoyed demoing). I have to add, I’m not sure if the beta is truly live. It’s more like a demo of a beta… 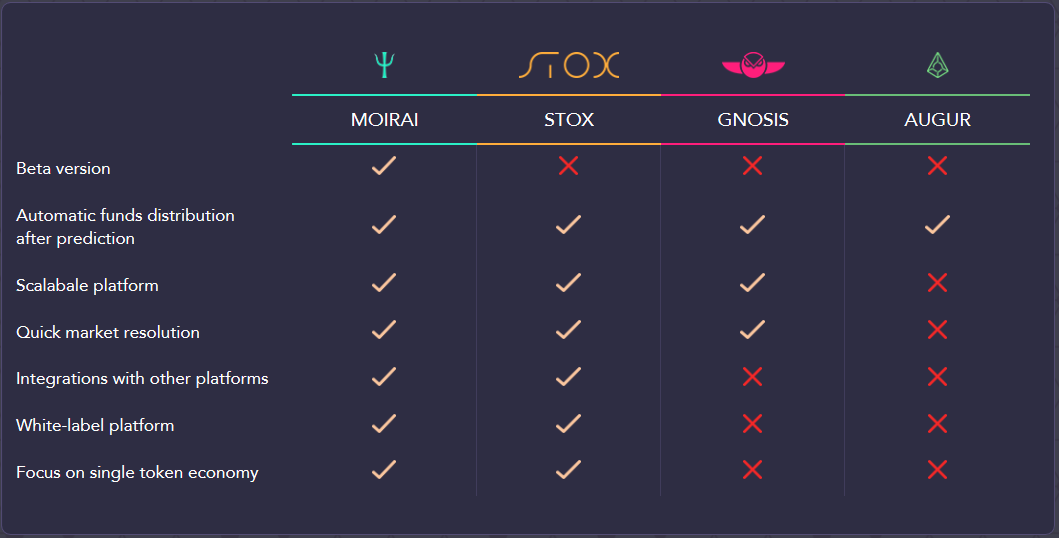 This chart fails to talk about the many disadvantages moirai has.

All wagers on the platform are placed, and cashed out in MOI token. However, according to their whitepaper, “The MOI will be purchased initially by users while using traditional money transfer methods with the Moirai or through existing cryptographic currency like Bitcoins, Ethereum and
Credit Cards.”

Players who want to participate in a prediction will be rewarded their stake for being right, and lose it for being wrong. Apparently providers can run their apps on the MOI platform for a syndication fee. Holders of MOI tokens will be rewarded 15% of the yearly profits, on a quarterly basis.

What initially caught my eye about this ICO is this gorgeous $5 million hard cap. Insanely low compared to its competitors; Stox ($24 mill), Gnosis ($68 mil), and Augur($189 million!)Seems like they could have a lot of room to grow.

This all sounds really great, too great even.

Token allocation:  Here’s where it gets weird , yet fits in well with the recent news, cause it looks like a very large amount of the total tokens will be going to the Moirai team.

The final 66 million tokens will be for the “development team” , and will be locked up for 12 months. ” This will motivate the Moirai team to achieve success and increase MOI coin value.”

There are so many things to like about Moirai, it’s hard for me to just give up on them. Starting with the token metrics. The tiny 5 million market cap, with 666 million tokens, $0.005 per token, means plenty of room for multiple gains. I am not recommending it though, its way way too risky with these allegations looming.

However, here’s Mr. Fidelman just a few hours ago on twitter. 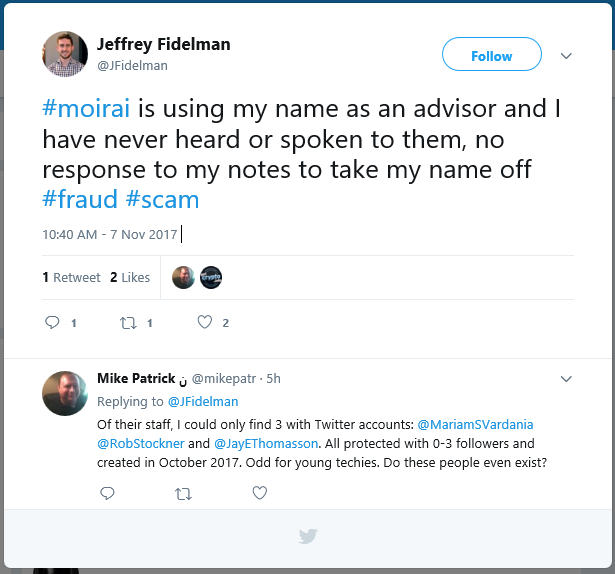 A poster by the name of garbonzo607 is absolutely demolishing Moirai on https://bitcointalk.org/index.php?topic=2290769.300

It’s definitely worth a look, he is using the “s” word, and has a lot of information, similar to what I’ve presented, to back it up.  In fact, that bitcointalk thread is filled with substantial allegations of moirai’s dishonesty. Also, one thing I’ve noticed is the devs/moirai spokesmen NEVER defend themselves against the allegations, and they don’t respond to my enquiring emails.

With a heavy heart, I cannot recommend buying into this ICO. It screams sketchy. I won’t go as far as many social media people have gone by calling this an elaborate hoax, but it does stink really bad . They don’t even try to cover the odor  either. If you all want to sacrifice your morals, and risk your hard earned money on this , I cant be mad at you.  I can think of several projects just as scammy as this one, that have performed really well in terms of price. I never invested in those, and I wont invest in this. My gut wont let me. 0 out of 10.

The presale is going on right now.  Their website says it ends on 11/25 , but the fellas in their telegram group say it ends in 11/10… here’s the link https://ico.moirai.io/